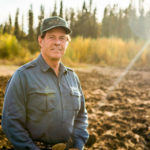 Posted in News By menundermicrosPosted on September 6, 2018September 11, 2018
ShareTweet

An old adage promises that hard work can reap the biggest of dividends for people who commit themselves to a job done right. This saying especially holds true for Gary Young and his company Young Living Essential Oils.

Thanks to years of hard work, research, and dedication, he has built a company that millions of people around the world hold in the highest regard. Moreover, the legacy of the essential oils sold around the globe can be traced back to his first farm in Idaho.

Company founder D. Gary Young created his first essential oils farm in St. Maries, Idaho. He purchased 160 acres of conifer land that had not been plowed or farmed in 42 years. It took him 10 days to break the ground and transform it into fields in which herbs and flowers could be planted and grown.

After the ground was broken, an extensive task that took its toll on Young’s John Deere eight-bottom and eight-wheel tractor, it had an initial pH level of 4.2. Young needed to bring its pH level to 7 to 7.8 to make the soil ideal in which to grow herbs that would produce the highest quality essential oils.

To achieve this pH level, he injected the newly broken ground with microbes and enzymes. After the soil was at the right pH level, Young then planted lavender and melissa seed that he brought with him from France. He also planted clary sage that he began growing in Seattle.

The farm in St. Maries, Idaho became highly successful in growing high-quality herbs that could themselves produce the highest quality essential oils. Year after year, people who were dedicated fans of the oils came to the farm to help harvest the herbs. They joined in the work of harvesting the herbs, unloading chips from the back of the truck, and then loading and packing down the chips in the farm’s 42,000 liter distillery.

Each harvest season brought its fair share of fun and unique stories. However, the first time that Donald Gary Young produced blue spruce essential oil became a hallmark moment in the life of the St. Maries farm. Even Young expected the essential oil from the blue spruce to be true to the name of its parent herb and come out of the distillery a bright blue color.

However, to his amazement, the oil came out as a champagne pink color. He quickly called to one of the people working alongside him, a woman named Cherie Ross. She also was astonished to see that blue spruce essential oil was not blue at all but instead a unique shade of soft pink.

This story is one that Young likes to recount as he remembers time spent working and harvesting on his first Young Living farm. He thanks the many people who came to help him harvest and distill the herbs each year. He acknowledges that without their help much of the work would have taken longer. He captured the memories of those times at the St. Maries farm in photographs that he has published on one of his blogs.

Armed with the farming success he enjoyed in St. Maries, Idaho, Young traveled to France in 1992 with his sights set on establishing a farm there. Despite not having enough cash to purchase any land outright, he was able to secure and lease a piece of property in Simiane, Provence in France.

Shortly after starting an essential oils farm on this property, he hosted several members of his company and gave them a tour of his new farm in France. By 1999, he was able to host 90 percent of the company members there.

Young made a success of herb and essential oils farming in France. In 2002, he was able to purchase an 80 acre farm in Provence. This new farm, which is used primarily for the production and harvesting of lavender, came with a castle that is more than 1000 years old. He was able to lease the castle directly from the community in which it is located.

The castle has since been converted to a visitors center and training facility for company members. Young takes delight in taking members to the castle to show them the view of the farm from the castle’s windows. The castle combined with the scenic, successful essential oils farm create memories that Young and company members can recall for a lifetime.

Young expanded on the success of his essential oils company by purchasing another farm in Mona, Utah. On this farm, he began growing peppermint and lavender among other herbs. He recalls one harvest season in particular when he and other company members tried to install a cooker. There was no room in which to install it, which at the time created a real challenge for Young and the others who were there. However, the story is now recalled as a problem that they all successfully overcame together.

He also recalls how he had no harvester at the time to use to harvest his peppermint. He converted a hay baler into a harvester that he could use on the peppermint crop that year. He likewise used his mechanical ingenuity to design and create his own wheel line and mini pivot as well as a three-line lavender planting machine. The planting machine is still in use today on the farm in St. Maries, Idaho.

The Mona farm became so successful in producing lavender that Young had to import four harvesters from France. All four of the harvesters are still in use today.

From the early days, which were filled with challenges and struggles, to the success that the Mona farm boasts of today, Young appreciates the help and input from all of the company members. He is proud of how far the Mona farm has come from its inception.

Young expanded his essential oil farming and production to Ecuador where he now owns and operates another herb farm. He built this farm out of ground that was totally undeveloped and cleared. In fact, he had to build the two mile dirt road leading up to the farm himself.

After he built the road, he added a guardhouse and a gate at the entrance of the farm. He also built a reservoir in which to hold water for the farm’s own use.

Today, the Ecuador farm is the site of a beautiful and successful essential oils agricultural production. It boasts of its own lake as well as a spa clinic and restaurant, which are both located along the lake’s shore.

He and his family also live on the Ecuador farm in their own house. He regularly hosts company members who belong to the Platinum and Gold membership clubs. They get to see for themselves how beautiful and successful the Ecuador farm is in person.


The most humble of beginnings can lead to the greatest rewards with hard work, dedication, and knowledge. Young has used this recipe to create his own successful with his essential oils farms that are located in the U.S., France, and Ecuador. Thanks to his agricultural savvy and expertise on essential oils, he has expanded his company’s reach to millions of people across the globe.