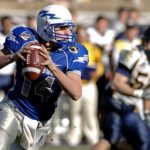 Posted in News, satire By menundermicrosPosted on August 22, 2018
ShareTweet

Well, the Huffington Post is at it again: they have just posted an opinion piece on Football, written by Jessica Luther, who hosts a feminist sports podcast called — I kid you not — “Burn It All Down.”

Her Huff Po piece is called “Football Won’t Turn Boys Into Men.” Just exactly what it WILL turn them into is never stated in her article, but the subtext is not reassuring. She pooh-poohs the idea that football will make boys tough, or that toughness is something at all desirable for men anyways. She points out, with ghoulish relish, that what football might do to the average barefoot boy with cheeks of tan is give him Chronic Traumatic Encephalopathy from repeated head trauma, even with a sturdy helmet in place.

Luther calls American football, not to be confused with Futbol, which is what they play South of the Border (or is it now South of the Wall?) both toxic and deadly. Tens of thousands of men who played American futbol — uh, I mean football — as boys will probably want to disagree, with a very high decibel level, about that.

And who can blame them? A high school football game on a crisp autumn night is one of the few pure and simple delights left to Americans. Countless movies and TV shows have celebrated it. The Super Bowl has deified it. Take away football from the American male and what do you have? A European, that’s what!

Does Football Make For Better Men?